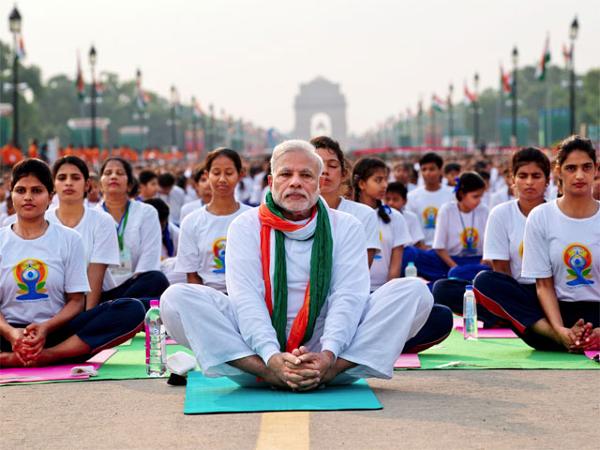 Recently the nation witnessed another communal polarisation saga as the Modi-led Sangh regime left no stone unturned to make their pet project of International Yoga Day on 21st June a successful show by draining money from public exchequer. The government has in turn made it a forcefully imposed event on the school children of the country and made the BJP – RSS favourite guru Ramdev the brand ambassador of the event.

The decision to include Suryanamaskar, a variant of yoga that literally means saluting the sun as a sign of power, drew flank from the Muslims of India, who found it as another instance of aggressive Hindutva campaign of the Sangh clique led by Modi. The war of words started between the religious fundamentalist organisations on the issue and the RSS functionaries with the notorious fame of Muslim bashing like Yogi Adityanath asked those opposed to the particular form of Yoga to leave India (read go to Pakistan). This scuffle again polarised the nation, especially the middle and lower middle classes on communal lines as the BJP – RSS combo used all the available ammo against the Muslims and Christians for their reluctance to worship what the Hindu’s claim to be worship-worthy.

The incident related to the Yoga Day is a cleverly devised strategy of the BJP government led by Modi, as the latter using his position as the premiere of the nation forwarded the suggestion to the United Nations. This issue raked up at a time when the Modi regime completed a year without any feasible plan that delivers anything sort of good governance or better days to the people but the multinational corporate sharks and their Indian comprador counterparts. The government which is facing stiff opposition nationwide over its total failure to answer the urgent issues of the nation, its people and its economy used the Yoga Day as a switch to derail the growth of public discontent against it.

The RSS and the BJP incepted by it has imported the most notorious fascist chauvinist notion of communal nationalism from their ideal Italian – German fascists Mussolini and Hitler. They have deliberately turned the topic of yoga into a communal agenda, whilst except for few spiritual toppings the yoga has nothing to do with religion. This reminds the people of the attempt made by Murli Manohar Joshi led HRD ministry under the prime ministership of Atal Bihari Vajpayee to make “Saraswati Vandana” compulsory for school students, or the forceful imposition of “Vande Mataram” singing on the people. These all acts are designed with a cunning motive to particularly paint the Muslim community as “anti-national” according to the perspective of nationalism defined by fascist ring leaders Hegdewar – Golwalkar of RSS. The same pattern is followed by Modi and his clan of RSS leaders after a decade to ensure that the communal polarisation mechanism, dubbed as “Gujarat Model” achieves success in the country, the RSS supporter Ramdev and his clan can use the opportunity to earn money from public exchequer and the attention of the nation is diverted to such issues from the real burning issues.