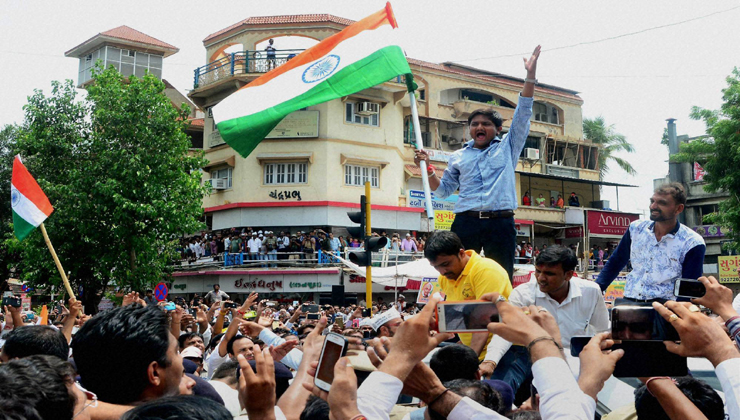 The story of a certain Patel, Hardik Patel, is making rounds in the national mainstream media. Hyped as a minuscule version of Sardar Patel, and a challenger to the BJP administration, the media is constantly focusing on the agitating Patel community members demanding reservation for their community in Gujarat where they have a Chief Minister from their caste, ironically as a community own most of the land estates, and have major presence in the most affluent sections. The Patel’s are not just affluent in their home province of Indian Gujarat, but even in neighbouring Pakistan, the UK, the US, and Canada, the community has made its remarkable presence felt by its affluence and riches.

The Patel agitation for reservation in Gujarat is a carefully kindled flame of caste conflagration, which is going to help the likes of Modi and the BJP, as these agitations are bound to target the Dalits, Tribal people, and the minority communities at its peak. The BJP, which represents the upper caste of the Hindu society, and despises the struggle of the lower and oppressed castes of the Hindu society as well as the tribal people for equality, will tactically support the Patel agitation unless the latter threatens its existence.

Reservation for Dalits and Tribals was incorporated as a principle of the government’s education and employment programmes due to the extreme poverty and backwardness of these socially and economically oppressed sections of the society that had been repressed by the dominance of Brahminism since centuries. The advent of the Abrahamic religions like Islam and Christianity in the Indian soil, which was embraced by the oppressed people of the lower castes and tribes for liberating themselves from the socio-economic oppression of Brahminism, could not free these people as even these religions that promised equality of all men, too felt prey to the predatory caste system. Dr B.R. Ambedkar raised the issue of the Dalits  since the British colonial rule and by using the platform provided to him by the British colonial rulers and later by Nehru, he provided a scope of cosmetic empowerment of the Dalit people through minuscule rights assigned to them in the Indian Constitution, which again is a subject of implementation by the upper-caste tyrants against whom it was supposed to work. The reservation system was such a cosmetic empowerment tool for the Dalits and the Tribals, though it failed drastically to improve the penetration of education and jobs into the Dalit and Tribal households due to the unfavourable socio-economic condition of these communities, still it made an impact in their lives and enabled a small part of the Dalits and Tribals to study in premier higher education institutions.

However, over the years it was found that the government’s reservation system, which was launched with a hype by the ‘Nehruvian Socialists’ as a weapon to end the caste oppression on the Dalits and tribal people, never yielded the results promised by the initiators. The caste based reservation has failed to benefit the broad sections of the oppressed castes and communities of the country, fuelled further caste based politics and increased social antagonism based on caste discrimination manifold.

The affluent castes of the Hindu society could not easily gulp the opportunities provided, at least on papers, to the oppressed castes and tribes of the country. They saw it as a challenge to their socio-economic hegemony and started anti-reservation campaigns in the name of providing equal opportunities. They simply undermined the fact that the people of these castes will have no opportunity to study, work, or progress ahead in their lives if the reservation system is lifted, as they do not have the socio-economic resources alike those of the higher echelons of the Hindu society to assist them in their intellectual and social growth.

The country in which a lot of people from the oppressed Dalit community are still treated in the most inhuman way, killed and raped at the free will of the upper caste people, forced to offer ‘begar’ or free labour to the feudal landlords, forbidden to enter places of worship and even draw water from wells in several parts of the country; there these oppressed castes and tribes need more reservation and promotion for growth against that of those from the upper castes.

The Patel agitation is a part of the plot in which several upper caste youths participated in the recent past, starting from the upper caste oriented ‘Youth for Equality’ and other such movements, which intends to dismantle the very limited scope that the students and youth from the oppressed castes and tribes enjoy at present in academic and public sector employment opportunities. The outrage of the so-called ‘Patel Agitation’ is more against the Dalits and tribals, than for the demand to include them in the reservation chart.

More the country will be roused by the Brahminist fascist policies of the Sangh Parivar and its accomplices, the more such well affluent castes will be incited to launch their own drive demanding reservations and equal opportunities. However, the facts will remain unchanged, that the major part of the rich and affluent sections of this country comes from the upper castes of the Hindu society, the poorest of this country comes from the oppressed Dalit community, Tribals, and religious minorities.

We as a nation have to decide upon a broad vision to uplift the socially oppressed castes, tribes and religious minorities, not only socially but also economically, to form a just, equal, and participative democratic society. Hence, it is the responsibility of the government to invest in the infrastructure of free and universal education, from primary to highest levels, open employment opportunities for the broader sections of the oppressed people, and ensure that they do not face any discrimination, vindictive-malicious propaganda, and can prosper like any other people of the country.

At this period, when neo-liberal economic policies are pulling strings of the governments, political parties and media are funded by big corporate monopoly capital, the government and the spokespersons of the ruling sections of India will cry foul on any attempt to involve the state in providing education and employment opportunities for the people, especially the oppressed and deprived sections of the people. They will claim that it is not the responsibility of the government to provide such services to the people, let these things be decided by the forces of the market. The government role, as per the advocates of the neo-liberal economy, should be confided only to maintain law and order, ie to detain and curb any socio-political movements that can harm the interest of the loot, plunder and exploitation of the big monopoly and finance capital. The major right-wing forces of the country, like the ruling BJP and the Congress, agrees to this vision officially and acts accordingly, by shamelessly serving the interest of the big monopoly capital, when they are in power.

But the people of the country experiences a very different story when they see these parties fighting among themselves during the annual elections at different levels, and making tall claims regarding social justice, economic excel, and political upliftment of the major part of the Indian population, ie the poor masses. The people vote them, based on their promises, only to be cheated repeatedly. This remains the farce of the democracy that our ruling cliques champion. On one hand it promises everything under the sun for the people during the elections, and on the other hand, they show the market as the solution to all demands of the people, when they are elected to power.